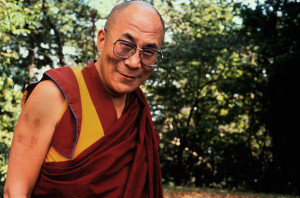 I admit it…I like rules.  I’m a Virgo, we like structure, lists and rules (probably why I created the 42Rules book series).  But it certainly is validating when I see that the Dalai Lama likes rules too.  I especially like his Rules #5…Learn the rules so you know how to break them properly.  Brilliant advice!

As I read through his list, I started thinking that most of these ideas were familiar to me in some way.  Then I remembered a course I took in college called “World Religions”.  It was a compare and contrast type of course that looked at, duh, all the major world religions.  What I took away from that class was that all the world religions, beliefs and faiths have some sort of common list of “rules to live by”. I know that “all” is a really big word…but in this case it is true.

The thing that I find promising is that all these “rules” are based on some “universal truths”.  There are some things that us as human beings just believe to be true – we should be nice to each other, we shouldn’t kill each other – that kind of thing.

So here is my list of Rules to Live by…what are yours?

Leave a comment below and we can see how many of these we can come up with.